Dreamstuff Youth Theatre was the place where Devious Theatre got our theatrical educations and learnt the ropes and it’s still going strong after all these years. 10 years to be precise.

This September Dreamstuff Youth Theatre will be 10 years old and to mark the celebrations they have just announced a near year long programme of theatre which will all fall under the handy banner of Dreamstuff 10. 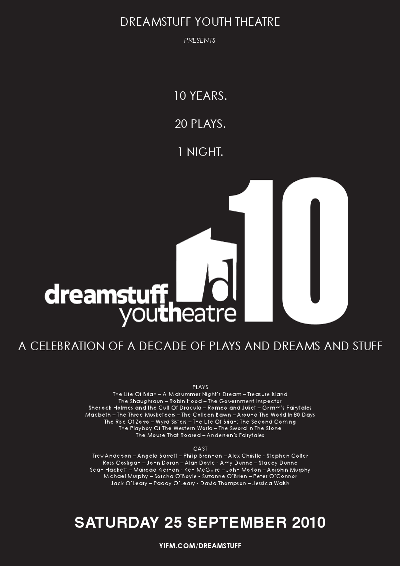 The programme kicks off in September with a frankly MASSIVE show on September 25th which will see a scene from every single Dreamstuff play over the past 10 years performed in the Watergate Theatre all in one night. So it’s a celebration of 10 years with 20 plays in one night, what’s not to love? The cast for the one night only show are: Trev Anderson, Angela Barrett, Philip Brennan, Alex Christle, Stephen Colfer, Ross Costigan, John Doran, Alan Doyle, Amy Dunne, Stacey Dunne, Sean Hackett, Mairead Kiernan, Ken McGuire, John Morton, Aoibhin Murphy, Michael Murphy, Sorcha O’Boyle, Suzanne O’Brien, Peter O’Connor, Jack O’Leary, Paddy O’Leary, David Thompson, Jessica Walsh.

The 20 plays that will get an airing are The Life Of Brian, A Midsummer Night’s Dream, Treasure Island, The Shaughraun, Robin Hood, The Government Inspector, Sherlock Holmes and the Cult Of Dracula, Romeo and Juliet, Grimm’s Fairytales, Macbeth, The Three Musketeers, The Colleen Bawn, Around The World In 80 Days, The Rise Of Zorro, Wyrd Sisters, The Life Of Brian: The Second Coming, The Playboy Of The Western World, The Sword In The Stone, The Mouse That Roared and Andersen’s Fairytales. 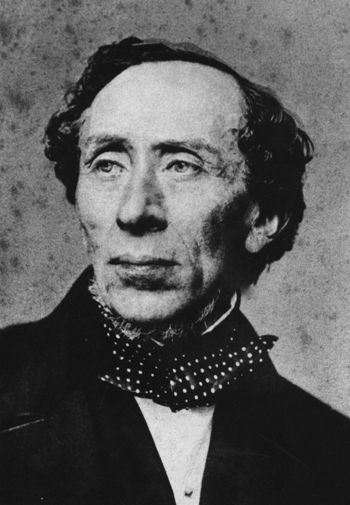 Speaking of Andersen’s Fairytales, this will be next and 20th full length Dreamstuff production. It also marks a first for Dreamstuff as this is a theatrical sequel of sorts, a follow up to 2004’s hugely successful Grimm Fairytales: The Adventures Of The Brothers Grimm. Andersen’s Fairytales: The Adventures Of Hans Christian Andersen is again written by John Morton (who is currently uncomfortable writing about himself in the third person) and directed by Angela Barrett. The story sees the titular Danish author caught up in the world of his own creations in a fairytale escapade that should hopefully be just as wild and weird as Dreamstuff’s first foray into fairytale literature. It will run in the Watergate Theatre from December 15th – 19th.

The group will also mark their first foray into radio theatre when the senior and junior classes produce 2 radio plays that will be broadcast on KCLR96FM by the year’s end.

To round off the year there will be a seasonal reading of Charles Dicken’s A Christmas Carol performed by a host of well known Kilkenny folk taking place in December. It will also feature a full choir and is bound to get that fuzzy Christmas feeling going.

Going into 2011, Dreamstuff Youth Theatre will be going abroad for the first time. They will be taking part in the prestigious National Theatre’s Connections programme which will see their first major production of the year travelling to Britain after it’s Watergate Theatre bow. The show in question is still to be announced but more on that should be forthcoming. It’s a major coup for the group and one which will see a whole bunch of young Kilkenny thespians getting to perform in Wales Millennium Centre in April 2011.

The Dreamstuff 10 programme will be rounded off by the fourth annual Shakespeare In The House festival which will again take place in Kilkenny in June, offering a whole bunch of Bard related performances and activities. Shows slated to take place include The Merry Wives Of Windsor and for the first time, The Tempest! Which of course is the show from which Dreamstuff takes it’s name.

So it’s a pretty full and exciting slate for Kilkenny’s premier youth theatre with a whole plethora of events going on from this September and through 2011. Stay tuned to yifm.com/dreamstuff for more details!