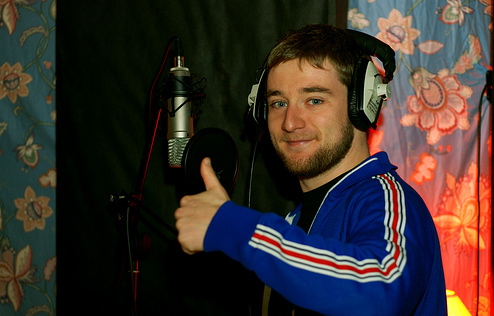 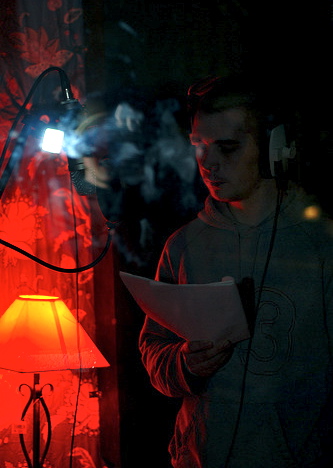 Behind-the-scenes photos of the ‘War of the Worlds‘ recording have just been added to the Devious Theatre Flickr Gallery.

There’s plenty more photos to come but for now you can get a glimpse into the recording process with shots of Producer/Sound Engineer Alan Dawson working with actors Kevin Mooney and John Morton. All the shots are taken by our co-director Ross Costigan who likes to get busy snapping when he’s not using his voice acting and shouting directions or pretending to be a giant alien tripod. The recording process for this one was a lot of long, tired, late night hours but we got through it with gallons of tea, countless packets of biscuits and a lot of tobacco. We’re really excited about how everything is starting to sound and we can’t wait to share the show with you on October 30th.

Since the relaunch of DeviousTheatre.com we’ve slowly but slowly been adding a huge archive of photographs to Flickr from all of our past productions too. At the moment you’ll find posters and behind-the-scenes shots for two productions of ‘Heart Shaped Vinyl‘, behind-the-scenes snaps during the creation of the ‘severed hand’ press packs we sent out for ‘Cannibal! the Musical‘, some of the artwork from ‘Trainspotting‘ and a collection of behind-the-scenes shots, publicity shots and live shots of ‘Smitten‘.

Rest assured there is PLENTY more to come so keep your eyes on Devious Theatre on Flickr and keep your ears peeled for all The War Of The Worlds promo on KCLR96FM.