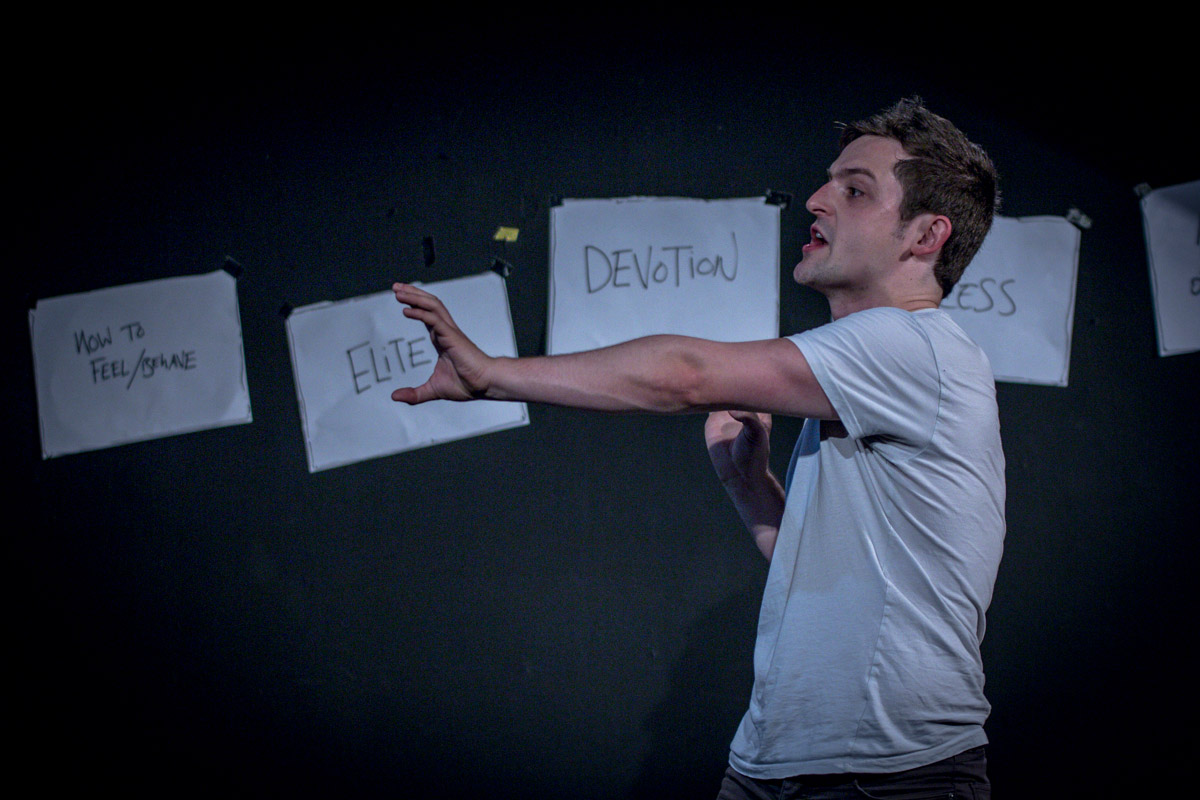 Devious News
The Centre Of The Universe
February 9, 2015
John Morton 2 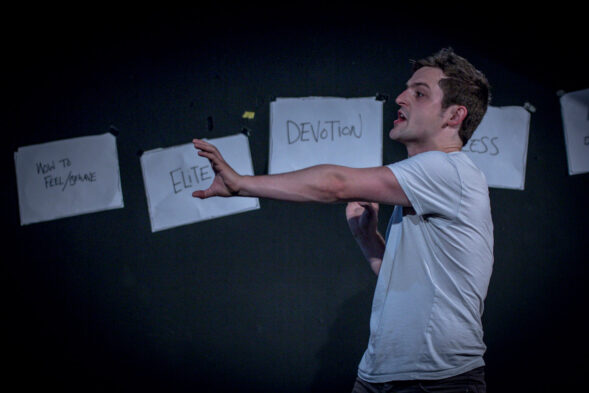 The director of The Centre Of The Universe, John Morton, asks the show’s writer and performer John Doran, some questions he knows the answers to and some he doesn’t.

So to begin, where did your initial idea behind the play come from?

I wanted to perform a TED style talk to people about something along the lines of self-help.  I wasn’t really sure where it would lead after that. Then I saw the work in progress version of Lippy in Theatre Machine Vol. III and I loved how frustrated the interviewer was at the operator in a really contained way. That kind of sparked the idea to have a guy who’s clearly got some personal baggage going on while trying to seem composed and cool to an audience. From there, it was just amusing to write about and mess with.

Why do you think you’ve got such a fascination with cults?

I think what fascinates me about cults, self-help and motivational speaking is the unavoidable cynicism you experience when encountering these things. I guess that motivated me to put myself in their shoes and attempt justifying why a person would be a cult member who gives motivational self-help speeches. Why the hell would you do that?! I was pretty intrigued to figure out why. It was fun, dark and ultimately comical.

Has your perception of cults changed all that much since creating and performing The Centre Of The Universe?

Quite a bit. I originally thought that cults were just these things with crazy people in them and if you join one, you’re a crazy person and the whole thing is just stupid. But once I started to write about why this character would join a cult, it made me look at cult members from a different angle. When I see a cult now, I’m more curious about what their demographic is, where the bulk of their membership comes from, any consistency in their enlistments that may create a clear picture to why they are successful and why exactly these specific people chose these specific cults. I guess I stopped judging them and started curiously looking at them, their people and their structures.

What’s the craziest thing you learned during researching the play?

I think the craziest thing that I had to comes to to terms with was that a lot of most cults teachings aren’t at all bad. This was difficult to admit because it could have potentially meant that in writing a play about a cult, I somehow wound up in a real one. Awkward. So naturally, I was reluctant to put to much thought into how I was finding myself casually agreeing with the teachings of certain cults. Luckily, it then became clear that what’s actually wrong with cults is their insane ability to isolate, extort and emotionally blackmail people. I guess it’s not that surprising to think that a cult would use basic, agreeable self-help disciplines in order to lure you in and eventually take all your money and have you work for free. The whole thing is fucking mental.

Since first performing it last year, what aspects of it have you found people have responded to the most?

What was really surprising was the amount of people who admitted to practising the same central technique that the character demonstrates in their own lives. I think it may be because of the character’s pretty common circumstances. Young person who’s out of college a year. Jobless. A bit lost, looking for meaning (or even better) something to just do. I think we all hit that bump at some point.

If you could join any cult, which one and why?

The second coming of Jesus cult in Siberia. Amazing digs. Beautiful location. Affordable. All you need to do is give them your passport and your in. Look it up.

The Centre Of The Universe plays Cleere’s Theatre, Kilkenny from Wednesday February 11th to Saturday February 14th at 8pm nightly. You can book your tickets in person in Cleere’s, by phone on 056-7762573 or online here. Join us…

tags: 2015 cleere's theatre cults irish theatre john doran Kilkenny one man show show in a bag the centre of the universe theatre
previous Cork Is The Centre Of The Universe
next Join Us...
Related Posts