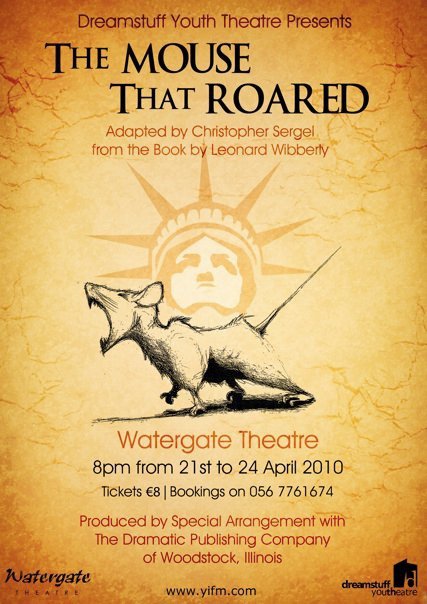 Yes, yes it will. This week to be precise. And in the Watergate Theatre no less. As their 10th birthday draws near our old alma mater of Dreamstuff Youth Theatre are presenting their 19th show in that many years. This time they are drawing from the well of political satire and performing The Mouse That Roared, in an adaptation by Christopher Sergel of Leonard Wibberley’s 1955 comic novel. The story was also adapted into a well received Peter Seller’s vehicle in 1959.

The Mouse That Roars tells the story of the quaint little country of Grand Fenwick who after being slighted by the US of A, decide to declare war on the great superpower and well, you’ll have to see for yourself.

Directed by Angela Barrett (last seen for us as Antonia in Can’t Pay? Won’t Pay!) who previously directed The Three Musketeers and The Sword In The Stone, The Mouse That Roared promises to be a great night at the theatre with the finest young thesps and comics that Kilkenny has to offer.

This show is the first one out of the blocks in Dreamstuff Youth Theatre’s 10th birthday celebrations. It will be followed by Shakespeare In The House in June and their first theatrical sequel in December (it’s all a tad hush hush right now) so it’s all go go go for Kilkenny’s most prolific youth theatre outfit this year.

The Mouse That Roared plays the Watergate Theatre, Kilkenny from 21st – 24th of April at 8pm nightly. Tickets are a damn cheap 8 Euro and bookings can be made at 056 – 7761674. See www.yifm.com for more details.